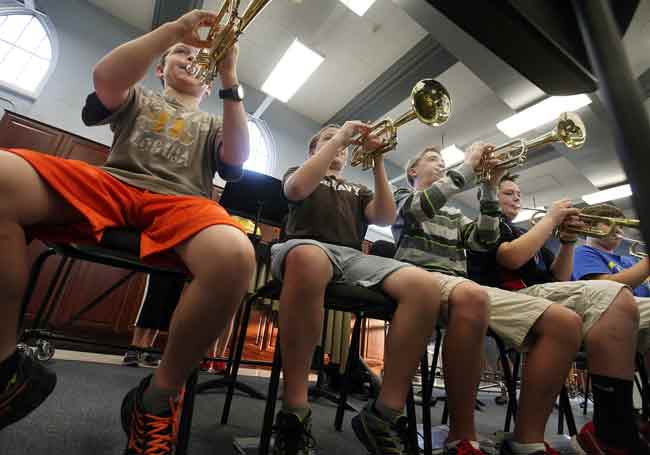 Quincy native John Lynn Lubker developed a love for music in the mid-1940s when he was a high school student while practicing the trombone in the fourth-floor band room what is now Quincy Junior High School.

After he graduated in 1947, Lubker went on to a distinguished career in psychology as a practitioner and educator while he continued to play music in various bands and orchestras.

But he never forgot his hometown roots.

A couple of years ago, Lubker and his wife, Bobbie Boyd Lubker, decided to give back to his alma mater. They made a significant donation to the Quincy Public Schools Foundation’s “Dream Big” campaign to recognize the music education he received while attending school in Quincy.

The Lubkers specified that the donation be used to help revitalize the band room, which had fallen into disrepair over the years. A leaky roof had caused considerable damage to the room’s ceiling and wall, and then the asbestos floor tiles started to break up. Other parts of the room had also deteriorated with age, including the curtains covering the tall windows on the room’s east-facing side.

The Lubkers’ donation triggered a rebirth of the band room. The Quincy School District initially used life-safety money to repair the roof, fix the ceiling, plaster the walls, apply paint, remove the asbestos floor tiles and install new flooring — all of which helped restore the room to a safe and solid environment for students.

But the life-safety money could only be used for structural repairs — not for aesthetic enhancements.

That’s where the Lubker donation came in. It’s being used to restore the room to its original grandeur and usefulness. For example, funds were spent replacing the dilapidated curtains on the east-facing windows with remote-controlled shades that block the morning sun’s glare.

Other funds were used to install new instrument-storage cabinets, refurbish the wooden podium and buy new chairs and music stands. The school also will be updating the room’s sound system, and there are “additional upgrades to come,” according to assistant principal Rick Owsley.

A dedication ceremony was held Thursday afternoon for the revitalized band room. The Lubkers traveled from their home in Chapel Hill, N.C., to be part of the festivities and were feted as guests of honor.

John Lubker said he was pleased to see all the improvements made to the band room over the past two years.

“I am truly impressed with what’s been done here,” he said. “I spent a lot of time in this room, and I enjoyed every minute of it.”

During the dedication ceremony, Superintendent Steve Cobb thanked the Lubkers for their donation on behalf of the district and the music students who will use the band room for years to come. Cobb said the aesthetic improvements being carried out with the couple’s donation are “one of those things that, as a tax-funded school district, we can’t provide.”

QJHS Band Director Debbie Johnson said the band room is vastly improved compared to just a few years ago when the ceiling and floor were literally crumbling.

“It’s just beautiful,” she said. “It turned out wonderfully, and we couldn’t have done it without their help.”

Owsley agreed the renovations wouldn’t have been possible without the Lubkers’ generosity.

“With dwindling public funds available for these types of projects, the Lubkers’ donation was absolutely essential to making this happen,” he said.

Owsley said quite a few QJHS music students took it upon themselves to send thank-you notes to the Lubkers for helping to restore the band room.

“This is now a much more effective room for music instruction,” he said.