What started as a fun assignment for 30 Adams School third-graders last year has blossomed into a powerful educational tool that may impact local preschoolers for years to come. 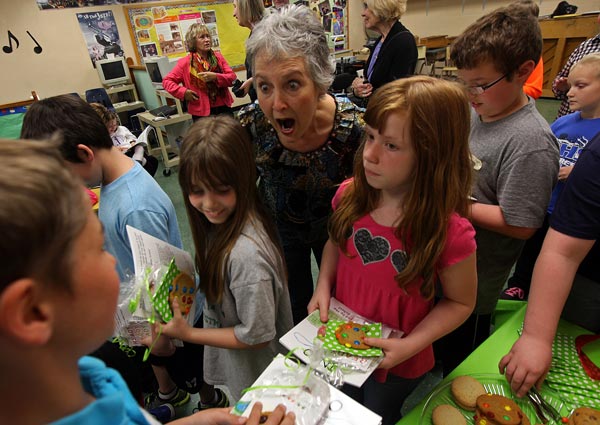 The assignment involved the creation of a children’s book designed to help youngsters learn how to read and recite their ABCs. Under the supervision of Sarah Guilford, the school’s music teacher, the students wrote, illustrated, colored and self-published a book based on a popular folk song about a dog named Bingo.

Each verse crafted by students requires the reader to sing and spell the names of 26 animals, each beginning with a different letter of the alphabet. Guilford believed it was important to incorporate music into the book, because research shows music can be an effective learning aid for young children.

The book was completed, and 50 copies were printed and distributed to disadvantaged preschoolers in Quincy.

However, that wasn’t the end of the story.

Some people liked the book so much that they decided it should have an even wider audience. That’s when the Quincy Medical Group’s Health Care Foundation agreed to pay to have 500 copies of the book professionally published.

Starting next week, family practitioners and pediatricians associated with QMG will start distributing a copy of the book to every mother who brings in a child for a 2-year-old wellness checkup. The goal is to encourage those parents to read to their children on a regular basis.

Once the 500 copies run out, more will be printed, according to Dr. Tanya Mero, an obstetrician/gynecologist who led the effort to have the book published. Mero knew about the Bingo book because her daughter, Lexi, was a third-grader at Adams School last year and served as project manager.

Mero, a member of the QMG Health Care Foundation’s governing board, attended meetings with pediatricians and family practitioners to ask if they would be interested in distributing the books to the parents of 2-year-olds.

“They thought that would be awesome, because reading to a child is so, so important in their development — not only in learning to read but to speak,” Mero said. “This book, especially, you can read to a baby because you can sing to a baby, and the Bingo song is so catchy. Anybody can read it, and anybody can sing it.”

Guilford initially conceived the book project after she heard about the “Ready, Set, Grow” initiative being launched in Adams County through the cooperative efforts of several community organizations.

This educational initiative — sponsored by the United Way and the Regional Office of Education — strives to get preschool-age children better prepared to enter school by encouraging adults to read and talk to them from the earliest points in their lives.

This effort was driven by statistics that showed 78 percent of the 3-year-olds entering Quincy’s Early Childhood and Family Center in 2012 did not recognize any letters, and 80 percent didn’t recognize any numbers. What’s more, many of those children came from homes with few, if any, books.

Guilford felt Adams School students could help by collecting hundreds of used children’s books and passing them along to low-income families, but she also wanted students to use their creativity to develop a new children’s book that could serve as fun learning tool for preschoolers.

That’s how the Bingo book came about.

As part of the book’s publication celebration, the Regional Office of Education paid to have some hard-cover copies donated to all local libraries in Adams County. Paperback copies also were presented Friday to all 30 students who played a role in creating the book — most of them now fourth-graders at Baldwin Intermediate School.

“I am really, really, really excited about this, because it’s just wonderful to see how much this book will be making a difference in every little kid’s life,” Lexi Mero said. “It’s just awesome to me. I never thought it would go this far.”

Guilford is leading another effort at Adams School this year to have third-graders create a second children’s book emphasizing the alphabet. This one will be based on the song, “He’s Got the Whole World in His Hands.”

Adams School third-graders also are hoping to collect 1,000 gently used books geared for preschoolers during April. The books, in turn, will be cleaned and turned over to the Adams County Health Department for distribution to families with preschoolers.

Karli Hagerbaumer, the 9-year-old project manager, said the aim of the book-collection campaign is “so we can help the kids get ready for kindergarten.”